LVL is unlocking the 'timber age'

The great thing about timber is that it’s a renewable resource. It can be grown, selectively and sustainably harvested, then grown once again.

IN THE PAST of timber construction, the size of components equated with strength. Today, strength equates with intelligence, through engineered wood, such as LVL (Laminated Veneer Lumber).

With newer advancements in peeling technology and lamination, manufacturers have been able to produce lighter and smaller LVL sections with a greater strength and longer span than sawn timber. As wood defects (i.e. strength reducing knots) have been removed and randomized within thin layers, LVL is stronger, straighter, and more uniform than traditional sawn timber. The phenomenon of shrinkage and swelling is reduced, saving the manufacturer costly callbacks on job sites. Due to its composite nature and pre-graded veneers for stiffness, LVL is much less likely to warp, twist or bow than tradition timber. LVL also has a lower thermal conductivity compared to bricks and concrete, combined with long span capability.

Without LVL, today’s homes would not have cost-efficient open plan living rooms, two-car garages free of centre support columns, or extra-wide doorways. LVL makes modern homes possible. Some major advantages of using LVL in construction are its relative low installation cost (minimum labour and high speed), and the fact that it can be manufactured to any length and desired shape. This opens up the door to a myriad of design possibilities, which make architects and professionals repeatedly come back for more.

As per Euroconstruct, construction volume in the eurozone grew by 3.5% in 2017. The strongest stimuli once again came from residential construction. Developments in 2017 were remarkable as growth in construction markets in Europe reached its highest level since 2006 (the outbreak of the international financial crisis) and housing demand rose in all 19 Euro zone members. This is the first time that growth has been seen across the board in Europe since the reunification of Germany; and it looks like this feat will be repeated in 2018.

The favourable development in EU construction demand is partly due to robust economic growth and its positive implications for household income, corporate profits and the state of public finances. Moreover, the low interest rate level, immigration and internal migration flows, as well as the investment backlog that has accumulated in areas like infrastructure since the financial crisis, is supporting the upswing.

In 2017 construction demand was the strongest in Hungary (+25%), the second smallest market in the EU area, followed by Ireland (+15%), Sweden (+10%), and Poland (+9%). Hungary also posted the highest growth rate forecasts for the next three years through to 2020 (+33%). In addition to state subsidies for residential construction, the more consistent use of EU funds especially for civil engineering will play an important role here. In the three-year growth projections, Hungary is once again followed by Ireland (+28%), Poland (+25%), the Czech Republic and Portugal (+15% respectively).

In Germany, construction activity in 2017 increased more strongly than in 2016, driven by higher demand for residential accommodation, a greater willingness to invest on the part of companies and a civil engineering drive by the German government. Although growth will slow down significantly in the midterm, investment in both the residential and the infrastructure segments is expected to be high in the long term. In addition, Germany has a traditionally highly developed prefab industry (16% of a total of 20% timber frame share in building methods), which favors the usage of LVL due to its precise dimensions and stability.

UK construction companies had their best year in a decade for starting work on new homes in 2017 and the outlook for 2018 is positive. Housing completions in 2017 rose by 4% to 147,278, the highest number since 2008. UK Prime Minister Theresa May wants construction of new homes to rise to 300,000 units/ year to tackle a shortage of housing and make housing more affordable. By recent standards, 300,000 units per year is a very high number – the last time that many were completed in a year in UK was in the financial year 1969–70. It is not clear where the UK will find the labor it needs to build these homes. There are currently more than 350,000 fewer construction workers employed in the UK than there were in 2008 before the global recession hit. A substantial portion of the current construction labor force is foreign born – having mainly moved to Britain from eastern Europe. In a post-Brexit Britain, those labor market shortages will only become more pressing. This will open the gate for a higher usage of prefabricated off-site manufactured housing structures, which regularly require the usage of engineered wood products, such as LVL, I-Joists, glulam, and open web trusses.

This, combined with a harsh climate and the need for fast construction and labor savings, will continue to favor off-site manufacturing with LVL and glulam used as framing solutions.

There has been a significant expansion of European LVL consumption over the past 10 years, as home and commercial builders increasingly adopt building systems that incorporate engineered timber. Consumption of LVL in Europe doubled from 65,000 m³ in 2000 to 125,000 m³ in 2004. Over the subsequent four years, LVL consumption increased by 11% annually, reaching 189,000 m³ in 2008. 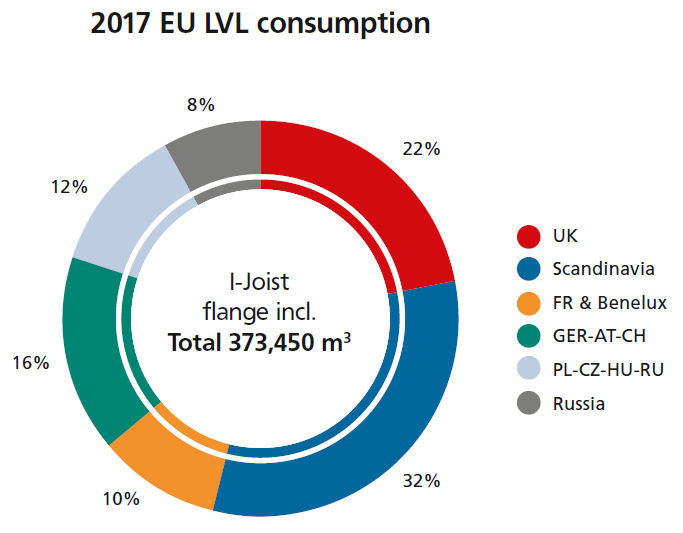 In 2009 and 2010, volumes dropped to 184,520 m³ and then to 178,150 m³ because of the global financial crisis. However, it is notable that these drops were quite modest compared to the precipitous decline experienced in North America.

Since 2010, LVL consumption in Europe has risen consistently, averaging an annual growth rate of 11% over the past six years and reaching 373,450 m3 in 2017. (I-Joist flange consumption incl.)

The LVL consumption growth in Europe is supported by several factors: Increases in housing starts in key EU markets and the growth of the timber frame share of total EU residential and non-residential construction; Growth in demand for LVL flanges in I-joists versus solid timber flanges (in 2012, one of the largest European producers of I-joists, Steico, began using LVL flanges instead of solid timber flanges for its I-joist production); Growing trend toward the use of prefabricated components and modules in several key European construction markets, fostering greater demand for engineered timber; The entry of prominent new manufacturers, such as Pollmeier, Steico, and Stora Enso, has raised the profile of LVL as a viable solution for architects, engineers, and contractors.

The two largest LVL-consuming regions in Europe are Scandinavia and the UK, which together account for 54% of all LVL demand in Europe. While beams, rim board, headers, posts, and columns account for 98% of all LVL consumed in the Scandinavian region and only 2% is used in flanges for I-joists, in the UK on the other hand, due to an already well-developed I-joist market (the largest in Europe, with nearly 19 million lm consumed in 2017), this ratio is more balanced: 49% of all LVL consumed in UK is used in flanges for I-joists, and 51% in solid section applications.

Over the next three years, LVL demand in Europe is forecasted to continue to grow with a projected average annual growth rate of 6%, reaching more than 440,000 m3 in 2020. This substantial LVL consumption increase will be supported by several key factors: Growing LVL usage rates and volumes, both as beams and headers, as well as I-Joist flanges; Builders’ needs to shorten building erection times, avoid costly equipment on site (e.g. cranes), reduce the cost of onsite labour, and eliminate callbacks; The trend toward slimmer wall cassettes, which can be realized with LVL ribs and panels in SIPs (structural insulated panels) allowing for increased living space, while achieving excellent heat exchange and acoustic properties.

The LVL markets across the globe are healthily positioned for sustainable growth.