My 40 years at Raute

Timo Reinikainen has one of the longest careers in Raute: he has been employed by the company over six decades. In June 2020, Timo will start his well-earned retirement after forty years of work. For the past twenty, he has been the head of the South America market area in Chile. Once retired, Timo plans to renovate his home, go boating and continue with golf, a hobby he picked up while in Chile.

Let’s go back in time forty years to 1979 when the young man, soon to be a Master of Science in Mechanical Engineering, came to Raute to do his thesis on veneer lathes. He had to find a new thesis subject only after having written a couple of pages, because he had already solved the problem at hand. “I proposed a solution to my research problem, and it proved feasible”, Timo reminisces the start of his career, and continues, “We had to slightly adjust the research plan, but I still continued with the veneer machines.”

Timo started work as the head of a R&D team after having completed the thesis. R&D was in the process of planning a new series of veneer lathes. A couple of years later, Timo started to lead the veneer machine design team. He stayed in this position for several years.

“At first, there were two full-time R&D employees managed by Matti Paakki, who had a great impact on my career. One of the most memorable moments during that time is when Matti motivated us by saying, ‘We are here, the best veneer lathe designers in the world, and if that is not what we are, then that is what we must become.’ As a young design engineer, this offered me motivation and a direction to follow.”

Timo started his first assignment in Germany in 1988. This turned out to be a very important period of time for the young Raute employee.

“I didn’t think for long about whether to embark on my first assignment abroad when Pekka Holma invited me to his corner office. In fact, I thought that I would be sent to South America, because Raute was already planning to establish a subsidiary there. It was a surprise when I was asked to go to Germany instead, but I was happy to go!”

A new sales unit was established in Germany in the late 1980s, and Timo worked as the unit’s technical support person for three years. During the assignment, he got plenty of hands-on experience from sales work, which led the hardworking and capable man to an international career in sales.

Timo’s technical background assisted him in seeing how important it is to understand the customers’ problems, propose solutions based on facts and justify the cost-effectiveness of investments. This experience has taken Timo from Europe to Canada and all the way to Chile.

From Germany to Finland and back abroad

Timo returned from Germany to Raute’s head office in Nastola, Finland, in the early 1990s, at which time the economic depression was at its deepest, because trade with Eastern Europe had died out. The determined professional worked first in Asian sales and then as the head of the plywood team.

During the 1990s, Timo’s specialisation in sales grew even deeper and he obtained even more professional skills when working as Raute’s sales manager for the next six years, until he was asked to go to Canada in 1998. There was a period of transition going on in Canada at that time, and Timo was asked to assist in the transition and manage Raute’s business in North America.

He spent two years in Canada before moving on again, this time to South America, more specifically Chile. This assignment was somewhat unexpected. Timo and his family had originally planned to move from Canada back to Finland, but the north was replaced with the mountainous scenery of the Pacific coast in 2000.

From north to south, all the way to Chile

Timo and his family moved to Chile in 2000 after the family had come to the decision that they could stay there for three years. “The children were of the upper secondary school age and my wife’s job also allowed us to go there. That is not always the case.”

As is fitting for Timo’s story, they spent a little longer in Chile than three years: they passed the two-decade mark this year. This means that Timo has been a Raute employee during six different decades, which is a respectable achievement!

“Now all of the family’s belongings have been packed into containers and shipped home, and we will be heading back to Finland soon, too. Naturally, Chile has become a second home for us – me and the wife have been here, just the two of us, for a total of 17 years. The children are so old that they moved out long time ago; to study in Finland, for example.”

Timo will have fond memories of Chile – many long-term customers and cooperation partners have stayed with him throughout his journey. Several major deals with Chilean partners over the course of the years are some of the highlights of Timo’s career. “This proves that our team succeeded in what we were trying to do: we earned the customers’ trust with our excellent work in the past. These were truly great moments.” 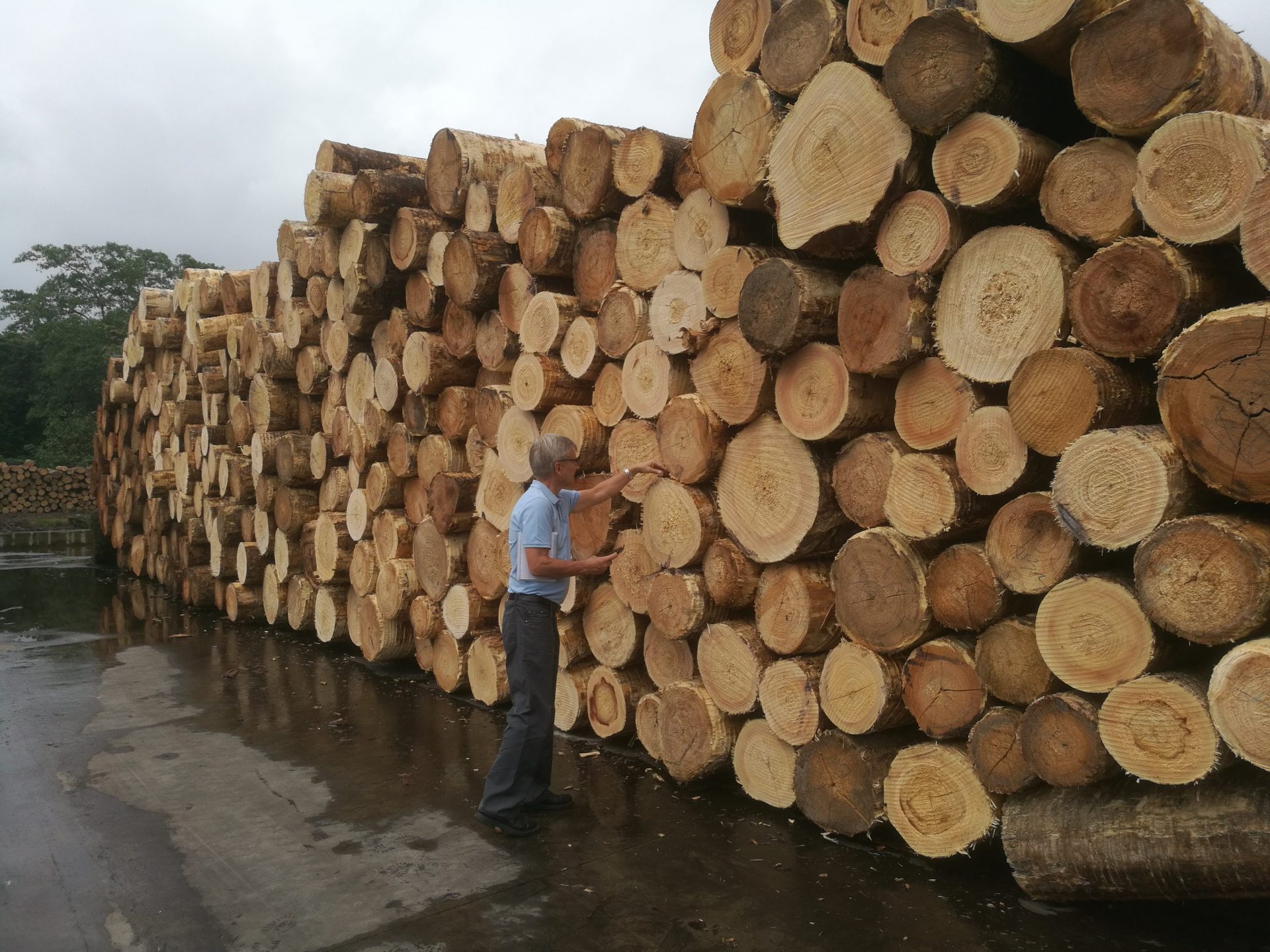 Timo has not had to cope in the world alone; he has always felt supported. Timo praises the team in Nastola for the way they support people who work abroad and cooperate with them.

"I have never felt alone, even though I have not been in the same country. Sales is teamwork, and the technological support we have received from Finland has been extremely valuable. Teamwork with the best professionals has assisted me in learning and staying up to date with the latest developments, which is very important in this line of work.”

Changes in plywood technology and plywood manufacture have been visible

Timo’s career is interesting, because there have been major changes over the course of his long career. Timo says that Raute has clearly changed from an engineering workshop to a technology company.

The basic plywood manufacturing machines and processes have remained the same, but the development of automation has allowed huge leaps forward.

“Automation was first introduced to replace manual work done by people. As it became more advanced, it started to optimise the entire work process to achieve the optimal value from the wood material. This has allowed us to develop our operations towards the best possible final result for all of us. In the past ten years, computer vision technology has raised automation to a whole new level.”

The wood material has also changed over the course of the years. Nowadays, almost all of the plywood is made from planted trees. Previously known for its expertise in birch plywood, Raute has developed efficient processes where a variety of wood types are changed into high-class wood products.

Raute has also changed, renewing and developing itself. “In addition to our own development work, successful corporate acquisitions have assisted us in achieving our leading position as a plywood and LVL technology supplier. For example, modern camera technology is far superior to the human eye in quality control and the sorting of veneer. This way, we can obtain as high a final product value as possible in the case of each sheet.”

The world has changed a great deal over the six decades, and teamwork has become even more significant. “Not that it has ever been a problem for us Finns,” Timo says. “People in Raute are efficient team players and can take on responsibilities if they wish. There is no need to ask for a permission for everything you do, which is a major difference when compared to Chile, for example.”

The trust and teamwork make the work flexible and fast. Timo says that it’s better if decisions can be made by the people who have the necessary information. Sales work is supported by technical expertise and proper project management at an early stage to make the large team committed to the customer. This, in turn, stimulates trust among the customers, which can be seen as long-term customer relations and successful investments.

Ways of working have changed through the years, but a lot has remained the same

The technological development in sales work has been wild, but the foundation has not changed. Even though the sales work is now supported by loads of tools and computers, project sales is still an interpersonal affair. “Sales work has changed in the sense that the customers can find much more information online before even being in contact with the salesperson. Raute has noticed this and been able to adapt to this way of working and care for its customers also in this way.”

Technology will never eradicate the basic core of sales work, personal relations. Despite there being plenty of information and studies available online, Timo is still of the opinion that a system designed together with the customer and resolving problems together is the best way to sell products – both for the customer and for Raute.

During Timo’s career, technoloy has also changed Raute’s machines. “Our devices are connected to the internet so that we can monitor them anywhere in the world. If there is a problem with a machine, we can quickly resolve it. This means that technology has made much more than just sales work easier.”

Timo believes that the future will bring with it even more technology and constant changes. The entry of new generations both in Raute’s workforce and in the customer organisations means that the adoption of technology has become more natural.

All’s well that ends well, the machines will stay in operation

The future belongs to younger people. Timo will fly back to Finland in early summer and start his retirement in July at the latest. Timo has seen plenty of changes and different cultures over the six decades, but there has been one constant – Raute.

Timo retired at the beginning of July 2020.