Plywood business and ice hockey. What do they have in common? Let Davis Zunde share his story with you.

Davis' schedule is quite busy: he organizes service visits,  makes his own trips to the mills, manages the office, and occasionally supports Nastola's project and sales teams in work with the Baltic countries and Poland.

"I started at Raute on February 17, 2020. During this time, my responsibilities have expanded considerably. The first 6 months were quite challenging. Over time I got better at networking, I went to Nastola a couple of times, and met more and more colleagues. Nowadays it is easy, I have excellent colleagues in sales, in spare parts, and also in the service. We are working as a big team, and in the Riga office we have daily tasks that we work together with Nastola."

This wasn't his first exposure to the forestry industry, though. Davis' first full-time job was as sales manager for classic woodworking equipment: panel saws, table saws, band saws, edge banding machines, and so on which are usually more common for carpenters.

"This job gave me an extensive understanding of the field and an excellent basis for quickly grasping the intricacies of more difficult and complex woodworking equipment like Raute equipment."

And that might have been the end of the story, if not for one little 'but'. It is not for nothing that we are presenting this story on the eve of the 2022 IIHF World Championship. Let's go back 24 years. That's when it all began.

"I started to play ice hockey when I was 4 years old. I’m very thankful to my parents, they’ve chosen to push me into some kind of activity. Some team sports activity, in my opinion, is very good for kids. Teaches you how to be in the team, how to communicate and behave, also with coaches," Davis says.

Hockey was an integral part of life for Davis. As a kid, it was a fun activity, and as he got older, the hobby became more serious and serious. Even though Davis wanted to quit as a teenager, thanks to the support and wisdom of his parents, he stayed in the sport. 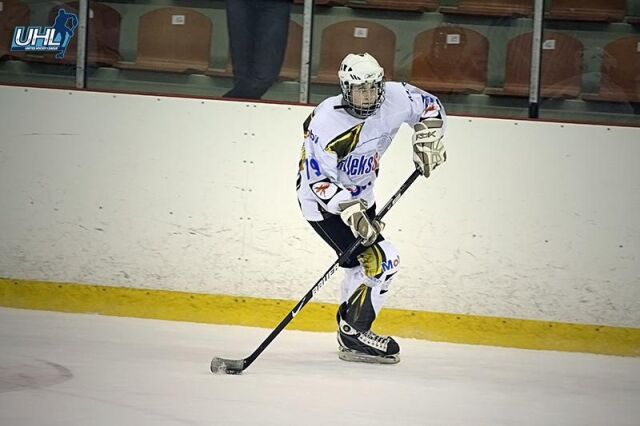 "I started playing at the age of 4 and played until I was 19. When I was 19 I suffered a serious spinal injury and had to miss 1 year, which is a very long time for a sport. I didn't need surgery, but was walking with a corset for 1 year."

After the injury, Davis was forced to stop playing and started to focus on other things, like his studies, but he was still drawn to the hockey field.

"It was a reason why I switched to being a referee because I wanted to still stand near ice hockey because it was something that I loved to do and over the years it became more and more important and serious to me. When I started to officiate I was working in junior games, officiating kids who were 9-10 years old, and also some amateur games. I didn’t know anything about the refereeing, or the rules. It is funny how  Every hockey player who has played thinks they know the rules until you give them a whistle. Before I started to officiate, I don’t think that I have ever held the rule book in my hands."

Over the years officiating career growth started as a little kid and went to Latvian top-division, Latvian championship. One of the most memorable and serious games where I was a referee was the game between Slovakia and Belarus, the final round of Olympic qualification. The arena was full of spectators, and the game was very intense. The stakes were high, you had to be 100% focused from the first minute until the end. One referee's error can affect the fate of the team, that will go to the Olympics. After that game, I sat in the locker room for an hour with my hands down, totally emotionally drained."

Davis has other landmark games in his arsenal, including World Championship games. Despite this serious level, Davis calls officiating a professional hobby.

"I don’t consider it as my job, because my job and my main priority is working in Raute. And my future where I see myself is Raute. Ice hockey I follow when I have spare time. Even I love to be on the ice. Thanks to Raute I can combine both of those things – refereeing and a full-time job at Raute." 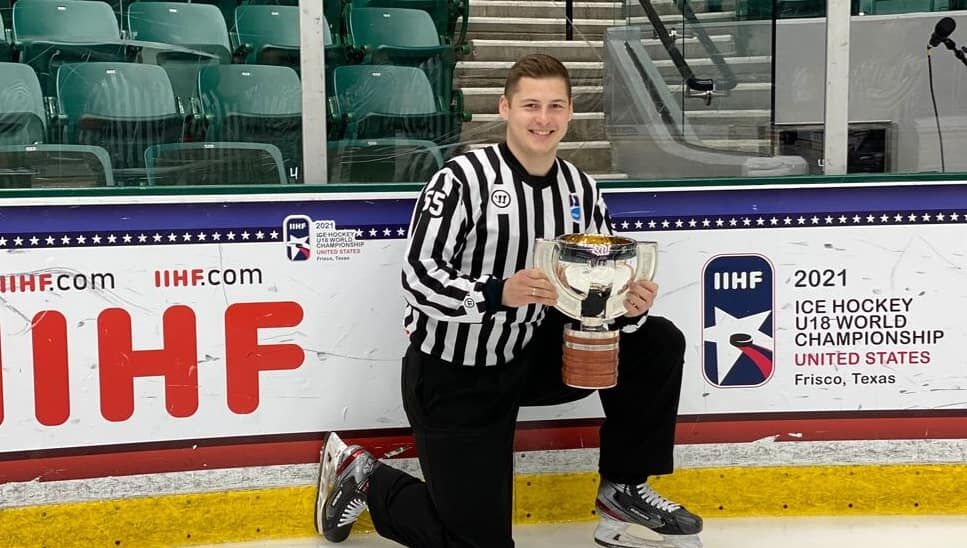 Davis at the 2021 Ice Hockey U18 World Championships

The game itself and the refereeing have taught Davis a lot. The drive to do better, the desire to see results, persistence, and an unyielding help Davis in his work.

"I think my biggest achievement is proving to my colleagues that I have a place in this company even though I don't have long experience in this sector. I'm still learning about our technology and will learn as long as I work here. Of course, there are good deals with different customers, but the main thing is that I can look in the mirror and say that I have done what I can so far and I feel that this is only beginning for me."

Striving to get the best of both worlds leads to high-class results at work and in a professional hobby.

"I’m laughing that in my life I’m where I am only because of ice hockey. I’m married to my wife because I was playing ice hockey - one of my friends from my hockey team had a high school graduation party, and I met my wife there. I work at Raute because I played hockey on a team whose owner was also the owner of a woodworking company, where aI got get my first full-time job. And I work at Raute because of my previous work experience. All the life lessons that hockey has brought helped me in my daily life, not only professional life but also personal. Also, the contacts that I have gained during my hockey life. And now working as a referee I have such a big contact list of people from all over the world."

Now on the threshold of the 2022 IIHF World Championship, pay extra attention to the referees to spot Davis there too! Wishing Davis a great experience and best of luck to all the teams.